Eduard Herkes
Comments Off on ‘Windows with the curtains wide open, unbelievable!’ 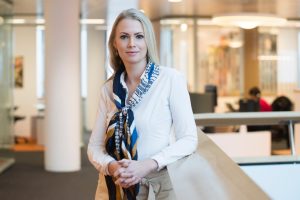 The Swedish Valentina Ericson has lived and worked in Norway, Spain and Belgium, but she sees herself staying longer in the Netherlands. “Life here has many similarities with what I like about my home country, but also some differences that I’ve come to appreciate.”

Since January of this year, Valentina works as Global Procurement Director at Nouryon (the branch of AKZO Nobel that was sold last year) in Amstelveen, operating from the AkzoNobel Center at Zuidas. “The Netherlands is not entirely new to me. Since June 2017, I have been stationed in Amsterdam but initially I still lived in Malmö. My second home here was the Novotel. They really went out of their way to make me feel at home, always greeting me with a ‘Hello Valentina’ and giving me gingerbread during Sinterklaas time.”

“However, I had to get used to the direct approach in the Netherlands. In Sweden you bring bad news with a whole story around it. The Dutch are more open and straightforward: they simply say what they think of something. It’s a different way of communicating, but I’ve come to appreciate it as I believe in honesty. And now I know that if someone does not agree with me, I should not take it personal.”

Taking root in the Netherlands has been a slow process as she has a full-time job, two children at an international school and people from Portugal, Israel and Turkey as her neighbours. “But my colleagues are Dutch; we often go to restaurants at Zuidas, such as Gustavino. And the mall at Gelderlandplein is very nice for shopping.”

What she was particularly surprised about, she says, are the windows with the curtains wide open. “Unbelievable! You can see through the entire house. Recently, I went sailing on the canals with a group of colleagues from all over the world. It was February and the weather was beautiful, so we saw Amsterdam at its best. Everyone was amazed! And of course we could look straight into all the houses along the canals. Typically Dutch, great!”

Amsterdamse Bos belongs to everyone

Close your eyes and Gordal tries to bring you to Spain