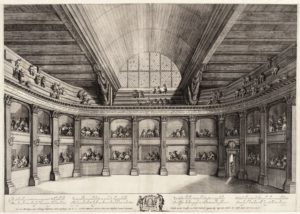 At the same place where the Gijsbreght van Aemstel premiered 382 years ago, the piece is again performed by Theater Kwast.

This will restore a fine tradition to its former glory. Between 1641 and 1968, Joost van den Vondel’s play about the mythical lord of Amsterdam, who tries to protect his city from Kennemers and Waterlanders on Christmas Eve, was performed in the municipal theatre around New Year’s Day. A record that no West End production can match.

Theater Kwast will return with the Gijsbreght for the third year in a row from 3 to 5 January 2020. Not in the Stadsschouwburg on the Leidseplein, but in hotel The Dylan on the Keizersgracht, which was built on the spot where the play premiered on 3 January 1638.

On 3 January, the first Amsterdam Theatre on the Keizersgracht opened its doors. Rembrandt van Rijn was there and in quick sketches he recorded a few scenes for posterity. Sketches that Theater Kwast would later use to recreate the original costumes.

Since the beginning of the 18th century, a Gijsbreght performance has always been followed by the playful epilogue The Wedding of Kloris and Roosje, a kind of mini opera that was full of crazy traditions. This afterglow is also performed again. In 2020 Ivo de Wijs and Pieter Niewint will sign for the Nieuwsjaarswensch in which 2019 will be put through the wringer.

With the picture:
The old theatre on the Keizersgracht 384 in Amsterdam, seen from the stage, circa 1658.

De Jonge Dikkert is aiming for a Michelin star

'We are not going to live anywhere else’