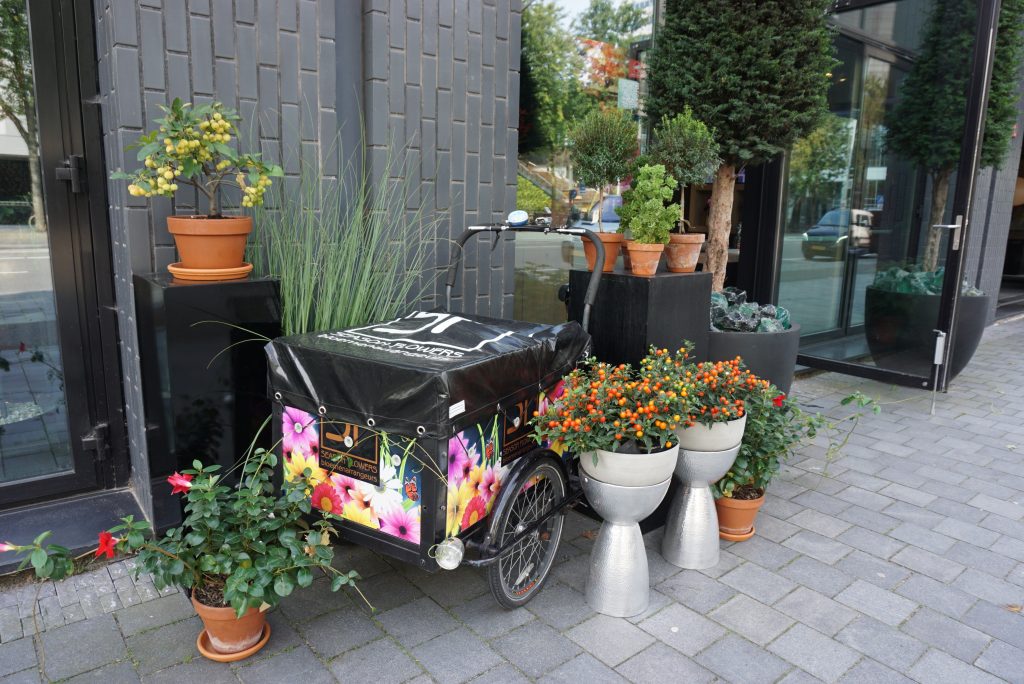 Maikel Mulder’s flower shop at Gustav Mahlerlaan 401-403, on the ground floor of the Amsterdam Symphony skyscraper, catches the eye. This sympathetic flower arranger operates a business – Season Flowers – that adds some real flourish to the area. It is full of colourful plants and bouquets and offers a welcome change to the sleek modern buildings at the Zuidas.

Business men and residents of the Zuidas and Gelderlandplein area are the main customers here at Season Flowers. To call it a flower shop doesn’t do justice to this establishment: the decorations are just as important as the flowers and plants being sold here. There are works of art on the wall, bouquets on top of large plinths and huge plants almost reaching the ceiling. Maikel Mulder clearly has an eye for interior design!

We move to a corner of Season Flowers with a table and two comfortable sofas. We sit down as the 39-year old husband and father explains how he moved into this line of work.

“Actually, I’ve always been working with my hands and I’m from a creative family: my dad was a carpenter and my mum was manager of the children’s farm De Uylenburg in Rembrandtpark where my sister and I spent our childhood. Wonderful, carefree years! Every day we helped out with taking care of the animals and the farm. From age twelve, we were allowed to run the place on our own whenever my mum was away.”

Maikel was an active and creative child, not only at the farm but also at home where he pieced together works of art using origami techniques and clay. He says he inherited the creative gene from his parents and admits his six-year old daughter has also been ‘infected’. Maikel beams: “My little girl Julie just loves arranging flowers.”

After finishing horticultural school in Amsterdam, Maikel studied floriculture for another four years at Florens College (currently, Wellant College) in nearby Aalsmeer. Every day after school Maikel worked as a cleaner in order to put aside some money for the future.

“After graduating, I embarked on a professional career and started working for a florist in Amsterdam selling mainly to business customers. That was a good move because there I met the love of my life, Wendy, who was working as the shop’s manager at the time. And as a nineteen year old I was given the chance to set up a new branch in Aalsmeer – a real honour at such a young age!”

After working for a boss for a few years, Maikel and Wendy decided to start their own business. “Those days, we lived at my parents-in-law’s house in Oostzaan. A corner of my father-in-law’s barn became our workplace. There, in that barn – of which we claimed more space year after year – we worked on flower arrangements and bouquets for large customers such as KLM and Martinair Party Service.”

“End of November was always our busiest time of the year: that’s when we made the Christmas pieces for the KLM check-in desks and Schiphol lounges. The pieces for the check-in desks had to be made of synthetic material and fixed to the desk with Velcro so angry customers wouldn’t be able to throw them around”, Maikel laughs.

“It was a very busy time; we would easily work 80 to 100 hours per week. After seven years we had enough, we were simply exhausted. We started looking for another place to work and live and found a big property in Zaandam. My father-in-law  got his barn back and we had a lot more space. We hired staff as our business grew rapidly. Our customers were mainly hotels and offices but we were frequently asked to deliver flower decorations for wedding and funerals.”

One would imagine that Maikel and Wendy were going to take it easy for a little while but that didn’t happen. There was simply no stopping the creative mind of this man blessed with green fingers and pretty soon he came up with a new idea. 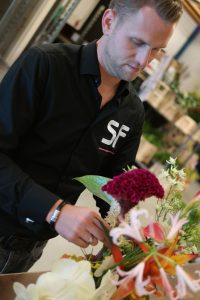 “I wanted to open a second shop. Not a small flower shop in the centre of Amsterdam where people drop in for a chat and buy a bunch of violets. Oh no! I wanted to be right in the middle of a business area where I could sell large flower decorations to the top segment of the market. Obviously, the Zuidas, the biggest business hub in the Netherlands, drew my attention.”

With this in mind, Maikel started looking around. “I was driving through the area in our Season Flowers van when I saw a ground-floor property available in one of the two 350 feet skyscrapers, Amsterdam Symphony. A wonderful location, perfect for my plans!”

“I’ve been here for more than 6 years now and I’m convinced I took the right decision at the right time. This area is only going to get bigger and more important. With the Zuidasdok project (rerouting part of the ring road A10 underground and extension of the train station, C.V.), access to the Zuidas and the northern part of the Randstad will only get better. Although people have no problem finding us at the moment, partly due to the free bus service the Kroonenberg Group provides, I’m sure the number of customers will grow substantially.”

During the interview a lot of customers come and go. It’s mainly  business men popping in and leaving a few minutes later with a nice bouquet in their hands. “They come here to buy flowers for anniversaries and birthdays. Some of our customers buy flower subscriptions in order to have beautiful fresh flowers on their reception desk every week. But we also welcome local residents buying a bunch of flowers for 10 euros.”

Does this flower artist have any other plans? “At the moment, I’m keeping things as they are and enjoy having two shops and eight employees. Although I’m not going to start anything new, a lot of things are happening around us. The next few years, 7,000 new homes will be built here and we’d love to do the decoration and styling of the interiors, balconies or rooftop terraces. Did you know DJ Martin Garrix is moving into a penthouse here? I really hope he asks me to help him choose the right plants. And when he’s on holiday we’ll take care of them, too – that’s another service we provide.”

Cor van Zadelhoff: 'Twenty years ago, I foresaw the huge future potential of the Zuidas'

‘When the job is done and the client is happy, that gives me a huge kick’