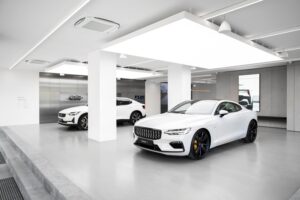 An experience shop is how the young Swedish car brand Polestar calls its new showroom in the Van Baerlestraat 2-4, close to the Vondelpark.

The Swedish electronic performance car brand Polestar shows its models in a modern space. You can touch the models, the Polar 1 and Polar 2, and through interactive displays and virtual reality, learn more about a car that is characterised by Scandinavian simplicity and transparency. Demos are also available for a test drive.

‘We have made our cars as uncomplicated as possible,’ says Thomas Ingenlath, ceo of Polestar. ‘We also do this with our experience shops, which are more reminiscent of an art gallery than a traditional showroom.’

He explains that the Polestar staff who welcome interested parties to the Polar Spaces are not on commission and are not targeting targets, but rather want to convey their enthusiasm for everything that makes a Polestar unique.

Polestar is an independent Swedish car market, which was founded in 2017 by Volvo Cars and Geely Holding. The car brand now has branches in Amsterdam, Rotterdam, Eindhoven and Leidschendam.

At the end of 2019, the car brand debuted in the Netherlands with the Polestar 1, which combines two electric motors with a powerful petrol engine. Three years later, the Polestar 2 followed, an all-electric performance ‘fastback’ with room for five people, an output of 408 hp, 660 NM of pulling power, four-wheel drive and a driving range of up to 470 kilometres. It is the first car in the world with an integrated Android infotainment system.

Polestar plans to introduce new versions of the Polestar 2 in the near future, making the car available to an even broader public. All Polestar branches can currently only be visited by appointment. You can find all the information on polestar.com.

ARTZUID is in the starting blocks again