‘Nobody is interested in me, guests come here for an experience’

Eduard Herkes
Comments Off on ‘Nobody is interested in me, guests come here for an experience’ 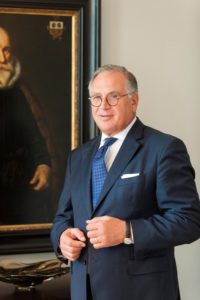 Roberto Payer is one of the best hoteliers in the world, a formidable achievement. Not only did he manage to put the Amsterdam Hilton Hotel firmly on the map, five years ago he also opened the Waldorf Astoria at Herengracht and he has been running both hotels ever since.

Is there an Italian who loves Amsterdam more than Roberto Payer, general manager of the city’s Hilton and Waldorf Astoria hotels? Probably not. “I found everything in Amsterdam. It’s the city that made me happy and still does. In Amsterdam I fell in love. Will I ever move back to Italy? No way, I want to be buried in Amsterdam!”

Roberto Payer (69) just got back from Tuscany, where he owns a house. Italy may be the country where he was born, but you won’t hear him wax lyrical about its cuisine, the delicious wines or the close-knit family ties. Payer has been living in Amsterdam since he was nineteen and he doesn’t feel the urge to go back to Italy. “No, that’s certainly not my intention.”

The question about moving back to Italy is not as inappropriate as it may seem. After all, Payer is nearing his 70th birthday and he feels he has seen everything under the sun during his long career. Then again, there is always a new challenge around the corner, like completing the third restyling project of the Hilton Hotel since he became general manager in 1992. “This year we’ll finish the lounge and then everything is done.”

Another challenge was the Waldorf Astoria Hotel which opened its doors  at the Herengracht in 2014. “After the opening I could have stopped working but I didn’t think that would’ve been fair. I wanted to show people I could manage a luxury hotel, so I stayed on. In 2021, the Rosewood Hotel will open in Amsterdam and I’m very curious to see how it will turn out compared to the Waldorf. That is my big problem: there is always something else to do. When should I call it a day?”

After this interview, Payer will fly to Las Vegas to attend the award ceremony for the best hotelier in the world. Virtuoso, a network of 1,000 travel agencies employing 17.500 travel advisors in 35 countries with an annual turnover of 23.7 billion dollars in luxury travel, has invited him to attend this prestigious event where there will also be an award ceremony for the best hotel in the world. Apart from the Waldorf Astoria, Amsterdam is represented by the Amstel Hotel, Hotel De L’Europe, The Grand, the Conservatorium Hotel and the Pulitzer Hotel.

“I’ll be staying for three days and I have around 80 appointments every day, plus lunches, social drinks and gala dinners. That is hard work but good fun. The most important thing for me is the Hotel of the Year Award. The best of the best. That would be the crown on my career. The Waldorf has already made the top-5; that is nice but still not good enough. For a few weeks I was sick of not getting the no. 1 spot. I simply hate losing, I want to win! If guests tell me they don’t like our hotel, I don’t sleep at night.”

The Waldorf may be one of the five best hotels in the world, but that won’t have much of an impact on what Payer is going to do next. He loves his job and Amsterdam too much to stop working. After graduating from hospitality business school at age nineteen, he applied for a job in the Netherlands. Since he was eight years old he had been dreaming of becoming general manager of a hotel.

“I’ve only experienced nice things in Amsterdam. When I came here in 1969, I lived in the Jordaan area and I knew the local greengrocer, the shrimp seller, the poulterer. I really felt at home; the people in the Jordaan loved Italians. It was great!”

Famous conductor Bernard Haitink introduced him to the world of classical music – ‘he opened my eyes, especially for Mahler and Bruckner’ – and Payer is a regular visitor to the city’s Concert Hall. For contemporary art he heads to the Stedelijk Museum. “In the seventies, the foundation for my cultural education was laid in the Stedelijk. I went there every Sunday afternoon. I really cannot live without the Concert Hall, the Opera and my three museums: Rijksmuseum, Van Gogh Museum and Stedelijk Museum.”

Amsterdam may have given Payer a lot, he himself has certainly given back to the city in equal measure. For example, he launched the Herring Party in the garden of the Hilton Hotel – a huge success every year. And he is chairman of the Tulip Festival,  president of the supervisory board for the PAN Art Fair and chairman of the Chocolate Festival, plus he holds various other positions on boards and commissions. “I’m in a relationship and my partner gives me room to do what I find important. I really feel I need to give back to the community.”

The Waldorf has caused an upturn in the number of well-heeled tourists visiting Amsterdam. The average luxury guest spends five to ten thousand euros in three days. “That’s what we give back to Amsterdam.” Lady Gaga, King Mohammed of Morocco, Keith Richards, Michelle Obama and Leonardo Dicaprio all stayed here – not that Payer would ever confirm this as discretion is his middle name.

Payer may be fond of Amsterdam, he doesn’t shy away from criticizing his adopted hometown. For many years he has been saying that Amsterdam needs to appoint a councillor for tourism. “The turnover in the city’s tourism sector is 240 billion euros and town hall doesn’t even have one dedicated manager focusing on this industry!” And there are other things bothering him as well. “The city let AirBnB in, but nobody thought about the consequences. And there are more than a million bicycles in Amsterdam and they cost the municipality a fortune – providing bicycle racks, removing them, etcetera. I would say: charge every bike owner a tenner and use this money to do nice things for our city. There is just no consistent policy.”

But above all, Payer is a hotelier through and through. “The atmosphere you create with your team makes or breaks your hotel. Why are guests willing to pay 1,200 euros or more for a night in the Waldorf Astoria? They come here for a wonderful experience and for the tremendous service. Everything has got to be perfect. I have a script, so each staff member knows exactly what needs to be done from the moment the guest arrives at the hotel entrance until the guest goes to his or her room. That is the ultimate service.”

And Payer won’t go for second best. “I can get incredibly angry if the doorman is wrongly positioned when a guest arrives by car. When you open the door, you are at the right-hand side; then you release the door handle and move to the left-hand side and keep your arm against the arch so the guest won’t bang his head. If my employees don’t follow the correct procedure I’ll let them know I’m unhappy, and I won’t leave it till the next day.”

To achieve this very high level of service, the Waldorf has 200 employees for 93 rooms, whereas the Hilton has 220 employees for 271 rooms. “The Hilton is a business-oriented hotel, mainly serving people visiting the Zuidas.” Each hotels has its own atmosphere. “I really love style. I don’t care about trends and I don’t follow them. They always simply die out. They last 6 or 9 months max, and then it’s over. Roberto’s, the classic Italian restaurant inside the Hilton Hotel, has been in business for 25 years. How many restaurants in Amsterdam can actually say the same?”

And it would be unusual to see Payer in a different type of restaurant. “I want pure food and I don’t like people toying with my meal. Try cooking something nice, that’s difficult enough. There aren’t many chefs who can really create a fantastic meal like Sidney Schutte, our chef and proud owner of two Michelin stars. I just want to eat very good food; no ostentatious stuff, please! I love liver with bacon and onions, a dish I regularly eat at Myrabelle (a cafe and restaurant in Amsterdam).”

He says he’s totally unpretentious. “Nobody is interested in me. Guests come here for an experience. And the general manager of a hotel is really nothing without his team: they decide who you are – every moment of the day.” Like a real Italian family all the employees of the Waldorf eat together at a big table every day. “I’ll sit wherever there is a chair available and that could be next to the dishwasher or the chambermaid. It’s really important to maintain that relationship. I can be tough with them, but at the same time: If you dare touch my team, Roberto Payer turns into a very nasty person.” 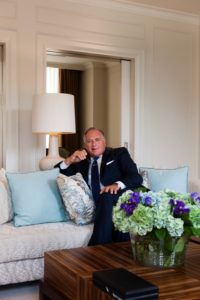