Caroline Vlietstra
Comments Off on Josh Veldhuizen: ‘Living on Zuidas is great!’

Josh Veldhuizen, owner of fashion label JOSH V, lives at the Zuidas. “Two years ago, when there were only a handful of people living here, my boyfriend Nick Amman and I bought an apartment in the Intermezzo Building.”

Some of her friends told her she was crazy. “They didn’t understand we wanted to live in an area with so many high-rise buildings. But they all keep saying how much they love New York. The sleek tall buildings, the immense views over the city, that’s why I love living here! It’s like being in ‘the Big Apple’ right here in Amsterdam”.

Having lived in the Miles Building for over a year, Josh Veldhoven and Nick will move into their 14th-floor apartment next month. At Miles, ten Ajax WAGs were her neighbours, in the Intermezzo she might run into famous DJ Martin Garrix who is living in a penthouse apartment.

“Nick and I thought this was a great area to live in for two entrepreneurs like us. When we decided to buy a house together we knew it was going to be at the Zuidas.”

“We bought two apartments In the Intermezzo Building that we could link together, creating a 200 m2 (2,150 ft2) home. As we’re both owners of a fashion label we’ve got a lot of clothes so we need massive wardrobes”, Josh smiles. “And Nick’s kids, aged 9 and 10, will have their own bedroom and bathroom in our new house.”

Josh followed her dreams: after working as a model she started her own fashion label and turned it into a multi-million dollar business.

‘I promote this area so much it sounds like I’m the Zuidas ambassador!’ 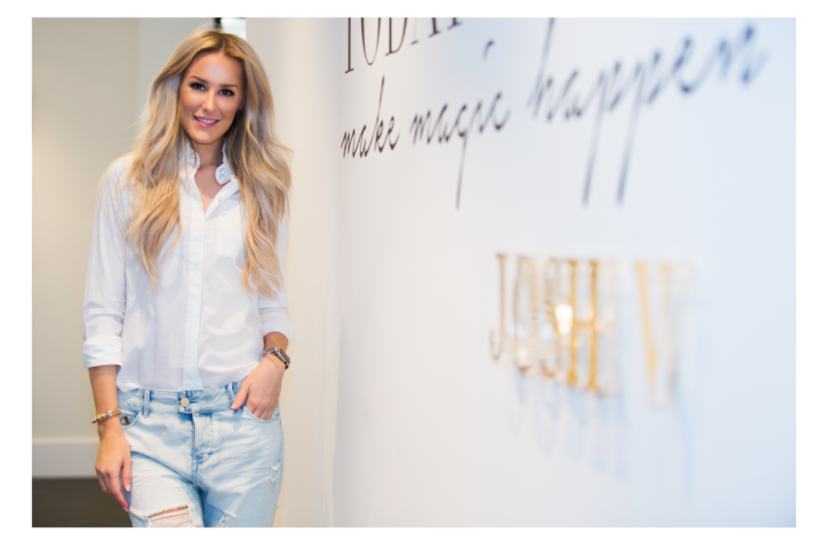 “I enjoyed being on the catwalk but I wanted more. I’m from a family of entrepreneurs and my dad told me: follow your passion because running a business is a 24/7 occupation. At first, he didn’t think much of the fashion world. ‘No money to be made’, he said. Well, I think he’s changed his mind”, Josh laughs.

Josh talks about how it all started. “In 2008, I won the modelling competition in the TV show Project Catwalk. Then I wrote a format for RTL 5 television. This series had around half a million weekly viewers in 2011. At the time, I was busy starting up JOSH V and people could follow that on TV. When the first episode was aired, my first collection was available in fashion stores – right according to plan! That really gave my fashion label a flying start.”

‘The sleek tall buildings and the immense views, that’s why I love living here’

Today, Josh employs 28 people, owns a production office in Guangzhou (China) and she’s even learnt Chinese. Her latest project is a pop-up store (3-14 October) at Reestraat 14 in Amsterdam. “JOSH V fans can see the entire collection and meet me there. I’ve always said I’ll ever own a shop but I might consider opening a brand store at the Zuidas. Chanel’s got an office here, so who knows…”

Josh uses social media to keep in touch with her many fans. She has 150,000 followers on Instagram and 30,000 subscriptions to her YouTube channel. “I love offering my fans a glimpse behind the scenes. They see me running my company or going on a fashion trip to Paris, London or Milan.”

“I’ve also posted a home tour video so fans can see how I live at the Zuidas, go out with friends to urban food court Market 33, buy a healthy drink at Juice Brothers or eat my lunch salad at food spot SLA. And I also share it when we go out for dinner at Bolenius, a restaurant growing its own vegetables and herbs.”

“When I go to Cosmos hairdressers or to Doctors Inc. for a quick fix, I’ll put it online as well. My followers see me having a facial treatment or a vitamin drip, Reviv. Absolutely recommended if you’re living a hectic life. Everything I need is right here at walking distance. ‘I promote this area so much it sounds like I’m the Zuidas ambassador!’”

Restaurant Bolenius: The vegetable garden of the Zuidas

Peter Lute is proud of ARC. by LUTE