‘It has only become more attractive, trendy and sociable here’

Monique Smitsloo
Comments Off on ‘It has only become more attractive, trendy and sociable here’ 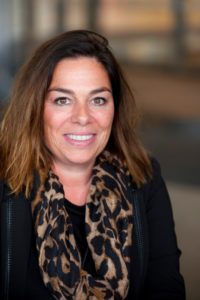 Lisette Vriend combines work and life at Zuidas. “Buitenveldert and Zuidas both have an atmosphere that suits me, and it has only become more attractive, trendy and sociable here.”

If you skip an Ajax football match to attend a community meeting, you can call yourself a proud Amsterdam-Buitenveldert local. Lisette Vriend feels at home in this neighbourhood. “Even grocery shopping is fun. I get in the elevator to enter the indoor shopping centre”.

Lisette tells me that “I was born in Aalsmeer. Even as a young girl, I was bored there. So later, I moved to Amsterdam and have never left. After college, I studied at Schoevers. For some time I had ambitions to be an air hostess, see the world, hang around pretty places for a while, it sounded nice… But I stopped dreaming eventually as life in the airline business is not as glamorous as it used to be. During that time, I realized I should do something else: sales. I proved to be good at it, and it made me happy. For a long time I worked at all levels of account management.”

Lisette lives at Gelderlandplein and works around the corner, at Boelelaan, as an assistant/office manager at Vanderkruys. Vanderkruys is a recruitment firm for responsible positions in the public and private-public sectors such as the government, hospitals and universities.

“For a while, I had been looking for a job in the neighbourhood. I wanted to live and work here. At Zuidas, recruitment is a booming business, but this specific role suits me.”

Lisette calls herself an “all-rounder”. “I like to get everything thrown in my direction and take the lead. Especially for activities such as organizing events and planning meetings.”

What about women at Zuidas?

According to Lisette, we do not have to worry about the number of women working at Zuidas. “In prominent positions around here, you see women. As a matter of fact, there are more women than men at my office.

“I have lived in Buitenveldert for years now. I used to think it was a bit old fashioned. But not anymore, it has developed and it is now a super luxurious place to live. Buitenveldert and Zuidas have an atmosphere that suits me. It has only become more attractive, trendy and sociable. Here you can find everything you want and need, right at your doorstep.

“The international feel appeals to me. There are many nationalities and expats in our apartment building. In the evening there is a variety of smells coming from everyone’s different cooking habits.”

“I like to have a good lunch, not grab a quick sandwich, but an extensive one, it might even take up the afternoon. With a lunch consisting of starters and a main-course, you do not need dinner at night.” She visits restaurants local restaurants a lot. “Ron Blaauw’s restaurants, as well as Het Bosch at Nieuwe Meer; all the typical hot spots for Zuidas people. And Aan de Poel in Amstelveen is a favourite as well.”

If it were up to Lisette, the only thing that would improve this new, glorious southern part of the A-10 would be if it were more car friendly.

“There are few parking options. If you don’t have a bike it is hard to get around. That proves to be annoying for people that do not live here. Oh, and a local cinema would be lovely. To go to see a film right now you need to take the tram into the centre. But really, what is that as a complaint?”

Lisette and her husband love this neighbourhood, and won’t miss a community meeting here, even if Ajax is playing at the Johan Cruyff ArenA on that particular night.

“We think it is essential to be involved. We would not miss a community meeting for the world. We even skipped an Ajax football match for one once. Harsh, but that’s life. I do like to be in the ArenA, real fun! But to be honest, as it starts getting colder in the winter months, it is good to sit on the couch and watch the games at home.”