‘Last year we rescued celebrity Lil’ Kleine from an elevator.’

Caroline Vlietstra
Comments Off on ‘Last year we rescued celebrity Lil’ Kleine from an elevator.’ 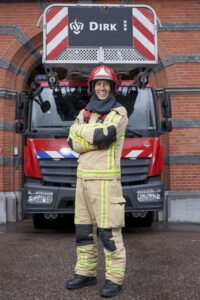 Amsterdam has had a professional fire service since 1874, making it the oldest in the Netherlands. Of course, a lot has changed since then. For example, look at the Zuidas area with its high rises. How can the fire service adapt to these new buildings? And what is a day like for these firefighters? We talked to 48 year old Peter Westerbeek, a supervisor at fire station Dirk.

Station Dirk is located in Amsterdam South, on the corner of Houthorststraat and Hobbemakade. It is the oldest operational fire station in Europe. Amsterdam-Amstelland’s fire service is responsible for the (fire) safety of the nearly one million people. Every day, at least 90 firefighters are on duty here, ready to serve the people of Amsterdam. In combination with the six voluntary stations, the total number of firefighters is 160.

Peter Westerbeek’s crew consists of eight people. He calls this his second family. “Together with my colleagues, we work 24-hour shifts, which means that we start at 8am and say goodbye at 8am the next day. We do this two days a week, so we have 48 hours of sleeping, eating and living together. You could say that Station Dirk is my second home.”

You are mistaken if you think firefighters sit around and wait till they get called out. “We work around the clock. After the morning briefing, we perform vehicle and equipment checks. That’s our daily routine. Maybe the previous crew was called out, and a crowbar or something was left behind.”

“After we complete the check-ups, and the station is clean, it is time for our daily exercise. We take a run through the Vondelpark, for example. We take the truck and all our gear and go running together for at least an hour and a half. Each of us is super fit. We have to be because we are regularly submitted to the beady eyes of a strict doctor. If you fail their tests, they follow you up until you succeed and pass the tests.”

“Members of the crew take turns to cook and prepare lunches. We spend afternoons doing house calls and exercises. During these house calls, the firemen and women visit people and explain safety measures and distribute smoke detectors.

“Some people are surprised when they open their doors. Some don’t believe that we are real firefighters,” Peter says, smiling. “But we can always point out our fire engine. And if that doesn’t help, we can always identify ourselves.”

The crew visits commercial and public properties as well. In the area around Station Dirk there are several iconic buildings, such as the Rijksmuseum, the concert hall and the Van Gogh museum.

“For each of those buildings, we have a specific plan of action in case of an emergency. We need to know where the emergency exits and the fire hydrants are. We check the plans regularly, and we are shown around the sites by the in-house emergency officers. The Rijksmuseum, home to Rembrandt’s The Night Watch, is, of course, a unique building. Our priority is saving humans and animals, obviously, but for a beautiful place with such precious pieces of art, we go one step further to save valuable contents. Luckily for The Night Watch, it has a special construction so that in the unfortunate case of a fire we can hopefully save it.”

Peter’s team recently had an orientation around Zuidas. “We paid a visit to EMA, the European Medical Agency. Now we know exactly where we can find the escape routes and how to connect to the water supply.”

“Everything worked out perfectly. During a calamity, our briefcases are ready with handsets and floor plans, so we know where to find the technical equipment. We have done the same thing at Amsterdam Rai Hotel. This building might look complicated from the outside, but the inside has one central point, so the guests know how to escape.”

Some of the buildings in the Zuidas are up to 70 metres high. No ladder reaches to the top.

“Our tallest ladder has a height of 24 metres. That is sufficient for the centre of Amsterdam but not for the Zuidas. At best it will take you to the sixth floor. It means that we would have to perform all rescues from the inside of the sixth floor. We’ve had a recent experience of this situation in the new Courthouse. An employee got trapped on the seventh floor, under a wooden construction, but our ladder only reached the third floor because of the height of the building’s levels. Orientation visits are essential to get this sort of knowledge beforehand.”

Firefighters deal with a lot more than just fires, they manage resuscitations as well. “That happens at least two or three times a week. We had one recently at ABN AMRO’s main office. Resuscitation is part of our job, but it does have an enormous impact. We have to talk to and support each other in order to carry on.”

Naturally, it is not all disasters for Station Dirk. There are also minor cases. Some can be laughed about, and there is, of course, false alarms.

“Most offices at Zuidas have their restaurants on the upper floors, the best location to have Thursday afternoon drinks. It often happens that an employee sets off the fire alarm on the fourteenth floor. The emergency room immediately gets a call, and they notify the reception in the building, and they have to go up and check. The receptionist has to climb the stairs, all fourteen flights of them, because during a fire alarm the elevators are shut down automatically. This receptionist has to report back within two minutes. If not, the nearest station is alarmed, in which case we are called out for what we presume to be a priority stage 1 alarm.”

Sometimes, Peter gets to tell exciting stories when he returns home from duty. “Last year we rescued celebrity Lil’ Kleine from an elevator at Zuidas. He was stuck inside it with his girlfriend and baby. To make matters worse, it was the hottest day of the year! But before I got back into our truck, I realized I wanted to capture the moment because my children are big fans. As I had forgotten my mobile, Lil’ Kleine took a shot with his phone of the two of us together. Imagine! My kids, 10 and 13, went crazy.”

Compliance as a passion