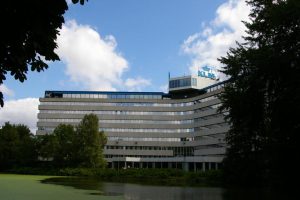 After having had its head office in Amstelveen for fifty years, KLM will move to a new location in Schiphol-East in 2024. The Dutch national airline wants to have a “campus” of 35,000 square meters built, which also houses KLM subsidiaries Transavia and Martinair, as well as the current offices at Schiphol-Rijk and Schiphol-Oost.

KLM has come to this decision because the current office building in Amstelveen needs major maintenance. The airline moved in 1971 from Schiphol-East to the edge of the A9, near the Old Village of Amstelveen. Before that, the head office was located in The Hague for decades.

The municipality of Amstelveen regrets the departure of its largest company, but is also very proud that the KLM head office has been in Amstelveen for fifty years. The Amstelveen alderman Floor Gordon (spatial planning) has attempted to maintain the head office for Amstelveen by proposing a better access to the head office with Schiphol-East. Yet, she thinks it is a logical choice for KLM to concentrate all its components in one location.

The green ambition of Xavier Giesen