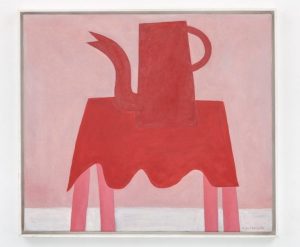 If something is recognizable in the work of Klaas Gubbels, then it is the coffee pot. You can’t miss them in the street scene of Amstelveen, because you will see them in different locations until September and at the same time you can see work by Gubbels in Museum Jan van der Togt.

Everyday objects are the motive for the sculptures and paintings by Klaas Gubbels. Often these are coffee pots that may or may not be on a table. By repeating this motif, attention is drawn to the form and treatment of making. Elegant contours and surfaces arise that give rise to all sorts of interpretations and associations.

For the Rotterdam-born artist, in addition to coffee pots – which he himself usually refers to as a kettle – there are mainly tables and chairs in his work. In his paintings, the coffee pot is like a character. He sits on a chair at a table or meets other brightly colored kettles in the flat surface. Gubbels wants to exploit the monotonous and puts the focus on the essence by omitting everything superfluous. “You can make a beautiful painting … that’s possible. But a painting that says something … that’s what I want “, he says about it himself.

Five images of Klaas Gubbels can be seen on Bovenkerkerkade and one on Dorpsplein. They are part of ARTZUID, the art event that is being held for the sixth time and is now being extended from Amsterdam-Zuid to Amstelveen for the first time.

The starting point of ARTZUID Amstelveen is the Roger statue on the Amsterdamseweg/Keizer Karelweg roundabout. Visitors then leave via the Keizer Karelweg southbound towards the Stadshart. A photo exhibition with work by Ed van der Elsken can be seen under the A9 viaduct. The last part of ARTZUID Amstelveen is via the Bovenkerkerkade towards the Oude Dorp. The sculpture route can be admired until 15 September.

Following the eighty-fifth birthday of Klaas Gubbels, Museum Jan van der Togt shows a selection of paintings that were created in close collaboration with the artist until 25 August. Around 25 works are exhibited that mean a lot to the artist and that he did not want to give up throughout his life. His paintings can be seen from various periods of his life; from the old investigative work to the well-known jug and new work.

The idea for ARTZUID was born in 2009 from the idea of ​​bringing people into conversation again, says Cintha van Heeswijck, one of the initiators. The Apollobuurt in Amsterdam Oud-Zuid has always been a nice and involved neighborhood, but because more and more residents from outside came to live here and people lead an increasingly busy life, the mutual contact became less and less. By placing art in the public space, you create conversation topics. It’s a low-threshold way to get people to talk to each other, so we started working on that. ”

ARTZUID takes place every two years, each with a different theme. This year the leafy Apollolaan and Minervalaan are the scene of figurative images and interactive spatial installations.

The more than sixty images and interactive experiences are in South Amsterdam until 15 September and are accessible 24/7 for free. “Every Sunday afternoon at 1 p.m. a tour starts from the information pavilion Minervalaan 1 for people who want to know more about the art pieces.” 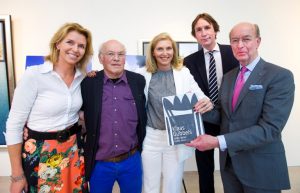 The green ambition of Xavier Giesen