In 2025, the new public library at Zuidas, ‘OBA Next’, will open its doors. Dedicated to the future of knowledge and information, this branch of the Amsterdam Public Library should above all become the cultural and social heart of the Zuidas area. In Europe alone, there are at least five special libraries that could be an inspiration for OBA NEXT. 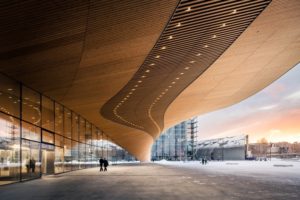 Oodi, Helsinki’s new Central Library, was completed in 2018 and stands out because of its futuristic architecture: from some angles the building looks like a wave, whereas from another perspective it resembles a ship. The impressive three-storey structure is made of glass and wood; it is not only a masterpiece of Finnish architecture but also a ‘green’ and sustainable building. 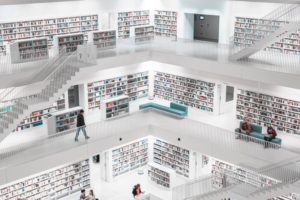 The new City Library at Mailänder Platz in Stuttgart opened in 2011 and was designed by Korean architect Eun Young Yi. The structure consists of nine levels spread out over four storeys. Its dominating feature is the modern and minimalist interior, as well as the white colour permeating the building. The symmetric entrance and spiral staircase, measuring 20,200 sq. m² (around 220,000 sq. ft), offer views on the building’s interior from all angles.

Vienna’s beautiful National Library is a well-known landmark with its baroque style and majestic rooms. A stone’s throw away from the Danube, the university campus houses this futuristic building, the library of the University of Economics and Business. It dates back to 1898 and was renovated by Zaha Hadid Architects after it was partially destroyed in an arson attack in 2005. 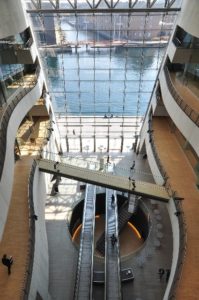 Copenhagen Royal Library, also known as the ‘Black Diamond’, is a real neo-modern jewel, located in the historic centre with views of the Øresund strait. It was built in 1999 as an extension to the old library and is one of the city’s most important buildings. The outside of this black cube offers a bewildering spectacle of angled lines, shiny black granite and glass surfaces, while the inside has charming curvy lines, open spaces and escalators. The large terrace can house an audience of up to 600 people for concerts or theatre plays. 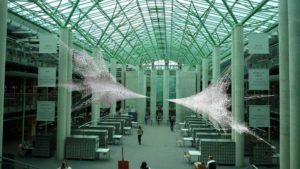 The Warsaw University Library is located in the heart of the city and was built in 1816. The new library is a modern and colourful building containing a terrace with four different gardens. The façade is surrounded by engraved stone blocks with texts in different languages, including Plato in ancient Greek and a text in old Polish. The outside of the building  is fitted with patinated copper and green ivy climbing up the walls between the windows.