Who knows better what’s going on at the Zuidas and what’s going to happen in the near future than the responsible city councillor? Eric van der Burg sheds his light on what is arguably the most exciting area of Amsterdam at the moment.

1) What caused the Zuidas to flourish in the last few years?

“The Dutch economy is growing, as is the appeal of the city of Amsterdam. But there is more than just that: the location close to Schiphol Airport, the investments – think about the big project Zuidasdok that is currently in its planning phase – and the new Station Zuid all really help to make this a thriving business centre.”

2) How was the current Zuidas area actually defined?

“To the north and south side, the Zuidas is delimited by existing residential areas. At the east side, the river Amstel forms a ‘natural boundary’ and to the west there is the Amstelveenseweg. But the latter offers some scope for expansion….”

3) So there is still growth potential for the Zuidas in terms of square miles?

“Absolutely! As far as we are concerned we’re going across the Amstelveenseweg and realize further growth from there!”

4) Could the Zuidas expand vertically, with Schiphol Airport so close by?

“We could still build a bit higher as there are new techniques available making high-rise buildings less of an obstacle for air traffic. But Schiphol, the driving force behind the Zuidas, and the size of the Amsterdam economy are the main limiting factors. Therefore, we’ll never be able to build as high as we would like to.” 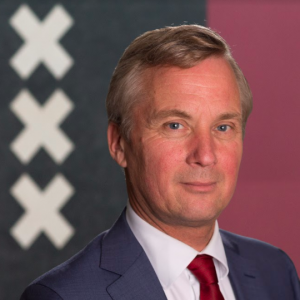 5) Is there room for social housing at the Zuidas and if so, why would that be important?

“There will definitely be social housing at the Zuidas because the city council wants Amsterdam to be a diverse city with homes for people from all walks of life. Given the presence of the VU Campus, building more student accommodation in this area is also a good idea.”

6) Will the Zuidas remain a predominantly business-oriented area or will there be more focus on the residential aspect?

“We’re aiming for the right mix. It is our international business district with the busiest train and metro station in the Netherlands, so we will continue to lobby and try to get the large international companies to move to the Zuidas. But at the same time we want to create a nice living environment with plenty of good facilities and enough opportunities for recreation.”

7) Are there certain companies you would like to see move to the Zuidas?

8) How important is the Zuidas for Amsterdam and for the Netherlands as a whole?

“Extremely important. The big multinational companies are here, the Zuidas is like a magnet and the entire Dutch economy benefits from its reputation!”

9) What is the Zuidas lacking at the moment and what would you like to see changed in the short run?

“A museum, a theatre; I would like to see the Zuidas come more alive in the evening and become the place to be in that respect as well.”

“By then, the Zuidas will still be the international business centre of the Netherlands, as it is nowadays. But by that time it will also be a fantastic place to live, to work and – as far as I’m concerned – to relax!”

BeoSound Shape: Design based on acoustics