De Jonge Dikkert is aiming for a Michelin star

At De Jonge Dikkert, you have always been able to enjoy a satisfying lunch or dinner. But as of the start of September the team have really raised the bar. Alongside a new head chef and maître d’, the restaurant now offers a wonderful gastronomic experience that is itching to be awarded a Michelin star in the near future.

In the recent past, one would go to De Jonge Dikkert to just have a nice meal. But these days, you can forget about the ‘just’ and ‘nice’. Top chefs Ron Blaauw and Julius Jasper dined there recently and were very enthusiastic, which certainly says a lot. With such a recommendation, you have all the reasons you need to check out the changes at De Jonge Dikkert personally.

Naturally, you can still have two or three courses. But then you are not doing yourself any favors, or the menu any justice. Take some more time and sit for the five or six courses, which is the chef’s menu, and simply the best, because it is only in this way that you can experience the superb refinement of the new menu and all the dimensions of the beautiful dishes.

The reason for all this positive change is the arrival of top chef Marcel Bonda, formerly the sous-chef at Amsterdam’s star restaurant Bord’eau in Hotel De L’Europe. While there, he contributed to the two Michelin stars the Hotel obtained under the inspiring leadership of Richard van Oostenbrugge and, as of 2018, Bas van Kranen. Bonda says that he is more than ready to be the Chef, take responsibility, and that “De Jonge Dikkert is a beautiful restaurant with lots of potential.”

Bondo underwent classical training but has developed a personal style and loves purity. “It always starts with the quality of the top products,” he says, “next, the taste and preparation are most important, and on top of all that is completing it with imagination, with style.”

And what he means by that immediately becomes clear when he serves us his “trade mark” seabass. The fish is steamed in kombu and slowly finished off in kelp, which makes all the minerals and salt go into the fish. The broth comes from the bones and the added clam’s water, which gives it a salty character, and is served next to the dish. All the vegetables on the plate, including sea fennel, sea lettuce, broccoli, as well as the clams and samphire, are served with a chickpea sauce. The result is absolutely mouth-watering, exquisite; all the levels of tastes are perfectly balanced.

The Chef’s special starter (Cauliflower Beurre Noisette with Pierre Robert, grapefruit and hazelnut), the delicious dessert (Dark Caraibe with caramel, blackberries and pecan and the variety of amuses) make you realise that there are great ambitions at De Jonge Dikkert.

“With the arrival of Marcel, we have entered the Champion’s League,” Eugène van Angelbeek tells me proudly. He is the co-owner of the restaurant alongside Arjen Kräwinkel. “Marcel only works with top products, and now we have homemade bread and butter. He brings in so much passion and drive, which is so enormously inspiring for us all.”

Added to provide additional inspiration, Laurence Reintjes has also joined the restaurant’s service team. The maître/sommelier got his experience at the Conservatorium Hotel, The Dylan and restaurant Vermeer, all situated in Amsterdam.

“I think I add to the refreshed style of the restaurant. The trend nowadays is for less heavy wines, less tannin, more fruity tastes and consideration to different wine-producing countries such as Germany. Also, younger guests prefer organic wines and like to know the origins.” Subsequently, the wine menu is changing to suit that trend and is being modernized.

“In spite of all the alterations, something that has not changed is the authenticity of De Jonge Dikkert,” Van Angelbeek reminds me. This is a restaurant where you are served by thoroughly trained staff who work with passion. The spirit behind this is the maitre d’ Paul Leeseman, who has been working for De Jonge Dikkert for twelve and a half years.

“I know a lot of the regulars and I will accompany them while changes take place in the restaurant,” Leeseman assures me. “Not everyone will immediately understand all of the dishes on the menu, but I will be there to explain.”

The restaurant retains a unique ambience, thanks to its location in an old Dutch mill dating back to 1672. In both the late 1980s and early ‘90s De Jonge Dikkert earned a Michelin star. Based on the new team, they will have a star again very soon. 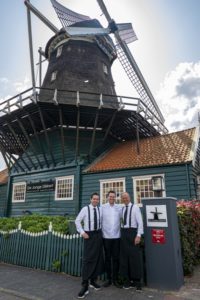 Cobra Art Gallery for Fashion On The Wall