Cor van Zadelhoff: ‘Twenty years ago, I foresaw the huge future potential of the Zuidas’

Eduard Herkes
Comments Off on Cor van Zadelhoff: ‘Twenty years ago, I foresaw the huge future potential of the Zuidas’ 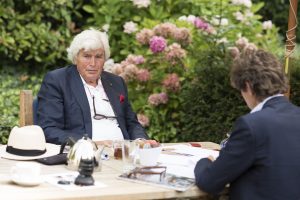 He regularly stops by at the Zuidas, soaking up the atmosphere. And long before Circl opened its doors he’d already been inside, driven by curiosity. Cor van Zadelhoff is 79 years old and may have limited his working life to being a supervisory board member of the company that bears his name, he’s still busy following the trends in real estate. “Twenty years ago, I foresaw the huge future potential of the Zuidas.”

“This is also part of the Zuidas,” he says, spreading his arms invitingly towards the garden behind his stately office in Amsterdam Oud-Zuid. Van Zadelhoff doesn’t really believe in strictly delimited areas. “After all, it’s a very short distance from the Zuidas to the Amsterdamse Bos or the Vondelpark. And the Rembrandt Tower is just a stone’s throw away from the Amstel Station.”

The Zadelhoff Company participates in no less than three projects at the Zuidas: NoMA House, Gershwin Brothers and Hourglass. “We’re working together with the Maarsen Group. Twenty years ago, we were involved in the land exchange of the Popeye Gold Star grounds (the tennis club that was located here, E.H.). Back then, we made the deliberate decision to combine working and living in order to create a bit of a buzz in the area. Just like the Loetje restaurant at the ground floor of Gershwin Brothers does these days.”

A day before the interview, Jones Lang LaSalle mentioned in the Zuidas Office Monitor that this area is in a very strong position. ‘The Zuidas benefits from the increasing demand for high-quality office buildings in the city’. Standard Life Investments claims that Amsterdam, partly due to the Zuidas, has the best office real estate market in Europe. Currently, there are five office blocks being built, with a total floor space of 60,000 m2. Plus, there are plans for a further 150,000 m2 of office space (new build property and renovations).

And then there is the biggest single-asset deal in Dutch history: in April 2017, the French property investment company Amundi bought the Atrium at the Zuidas for 500 million euros. As recently as 2012, the property changed hands for a mere 100 million euros.

While Mr. van Zadelhoff prefers to leave comments on the current market developments to his CEO, he doesn’t mind giving his view on the Zuidas: “A magnet for the entire city. The Zuidas serves the top end of the real estate market but at the same time it can only meet a small part of the overall demand. For example, a large organization like ING Bank moved to Amsterdam Zuidoost, because there is more floor space available in that area. The same holds true for Deutsche Bank. And yet the Zuidas is a real magnet; even more remote areas such as Riekerpolder and Sloterdijk benefit from its reputation.”

“Over the years, the Zuidas gained enough substance to expand significantly. At first there was only the district court and the ABN AMRO headquarters. Look at the place now! And there is a lot more differentiation with companies like AkzoNobel and Cushman & Wakefield. It has become a very pleasant and vibrant part of town. My great hero is the Dutch architect and city planner H.P. Berlage. His ‘Plan Zuid’ is a prime example of a successful development project that combines living, working and relaxing. This combination is essential if you don’t want to create a ghost town like Houston or Dallas. Even in New York they changed course: now there’s a better mix of living and working, even in downtown Manhattan.”

“The Zuidas is being developed in the spirit of Berlage’s ideals. That makes this area enjoyable and lively. And this mixture of working and living is very important. There is a lot of focus on the so-called ‘plinths’: businesses that attract people, like a book store or a restaurant. But all the commuter traffic is a disaster you really want to avoid. In my opinion, one should be able to walk or cycle to work. The Zuidas offers a nice living environment, with the Amsterdamse Bos and the Vondelpark within striking distance. The river Amstel is nearby and the bustling RAI area lies just around the corner.”

The lack of good residential property in the very top segment – essential to attract large companies and their CEOs to Amsterdam – really poses a problem, according to Van Zadelhoff. “It’s very hard to find and that will cause the square metre price for luxury apartments to rise from 10,000 to 20,000 euros. Mind you, I’m talking about Greater Amsterdam because such residential property doesn’t need to be located right at the Zuidas. At the same time, I think Amsterdam is a fantastic city. I love it. If only I could find enough room for my 25 Frisian horses I’d consider moving here.”

But Van Zadelhoff is still pretty active in Amsterdam, especially when it comes to investing in unique edifices. “Good real estate stays good real estate, so you don’t want to sell it. I’m looking for buildings that are irreplaceable because of their location or quality, such as the Stage Entertainment building at De Boelelaan and Aldo van Eyck’s Burgerweeshuis at the Amstelveenseweg.” The latter building is owned by Zadelhoff and Nijkerk. The development company BPD – formerly the Bouwfonds – will soon move into this building and use it as its regional headquarters for the north-western part of the Netherlands.

“By the way, just like AkzoNobel, the Bouwfonds has a very nice art collection. Yesterday, I went to Voorlinden (the museum in the town of Wassenaar owned by the entrepreneur and art collector Joop van Caldenborgh, E.H.), another wonderful project that adds a lot of value to the concept of living, working and relaxing. Museums are very important to create a nice, attractive living environment. The same holds true for the Zuidas; no wonder there are talks about opening a museum there.”

Studies Economics at University of Amsterdam

Member of supervisory board Zadelhoff

Invests in unique property, e.g. the Volkskrant building, the Diamant Bourse building and the Renault building