Healthcare and cosmetic medicine under one roof – it may not be an obvious combination but you’ll think differently after reading this story about aesthetic doctors Rogier Holtz and Floor Claus.

They run a successful clinic, CLAUSHOLTZ Aesthetics, at Paulus Potterstraat in Amsterdam-Zuid. In October, they’ll open a second clinic in the WTC Building at the Zuidas. 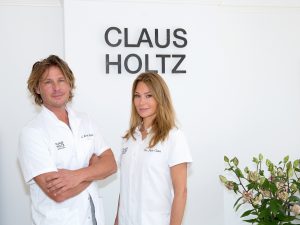 The use of Botox, regular vitamin shots and non-surgical skin tightening is becoming increasingly popular. If done well, people won’t notice you’ve had treatment but you’ll definitely look better and fresher than ever.

CLAUSHOLTZ Aesthetics is a well-established clinic for cosmetic treatments, specialized in injectables, anti-aging, eye-lid corrections and skin therapy. The clinic is known for its subtle treatments and natural results. Rogier Holtz, a casually dressed man in his forties, looks more like a laidback surf dude than a cosmetic doctor. We’re not surprised to hear that in his spare time Rogier loves riding waves.

Read the whole interview in our magazine; ZUIDAS. magazine is also in written in English and you can find a copy in every public area on the Zuidas.

A bit of glamour at Total4Living