Liesbeth Vijfvinkel
Comments Off on Circl, sustainable club house for the neighbourhood 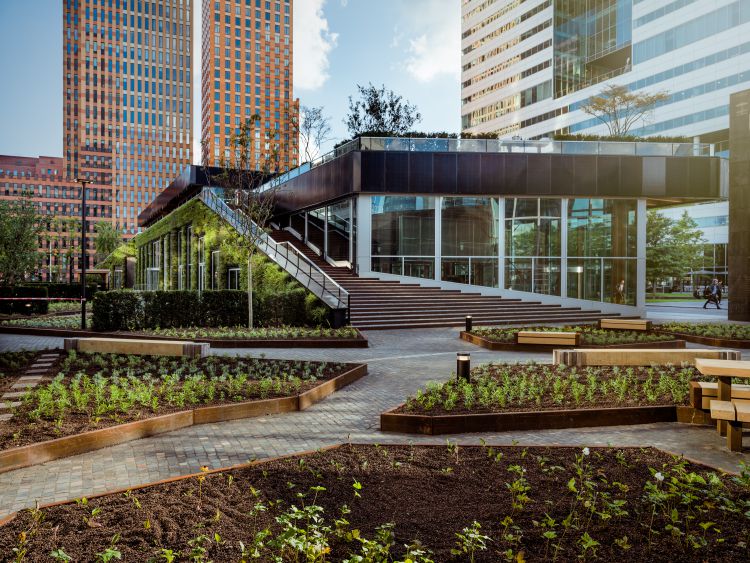 In September, Circl – the pavilion located in front of the ABN AMRO building – opened its doors. This ultra-sustainable edifice is now ready to facilitate special encounters between employees and customers, educational institutions, companies, start-ups and local residents. Everyone is welcome to join in and start making a step to a more sustainable world.

The original plan for this space at Mahler Square was to create a pavilion that would compensate for the lack of meeting rooms in the ABN AMRO building. In due time, a project group was set up to ensure all the principles of sustainability were adhered to. “But we weren’t really happy with the initial design”, Circl’s programme manager, Malu Hilverink, starts her story.

“It was a wonderful opportunity to build something special at this location. And it would be a real shame if it wasn’t done to perfection. As it is ABN AMRO’s mission to make its own buildings and those of its customers more sustainable, the pavilion should become the ultimate in sustainability.” So the project group discarded the initial design. What followed were two weeks of silence…

“We share a common task: to keep our earth beautiful for future generations”

After two long weeks, the architect presented a new, ambitious design – made in cooperation with Delft University of Technology and based on circularity. “Circular means the building parts can be disassembled and reused. It is not our intention to take down Circl after a few years but if that were the case all the materials could be used again so they’ll keep their value. Compare it to Lego bricks that can be used forever because they just never break. If all buildings were designed according to the principle of circularity we’d never have to throw stuff away again”, Hilverink explains.

With this idea in mind, the existing concrete structure at Mahler Square was refurbished in a completely circular way. Since all involved parties were new to this, a lot of questions popped up. “Every single piece of material was scrutinized: where does it come from, how much CO2 was emitted during its production, what is its lifetime, what does it cost, what can we do with it at a later stage? This resulted in some surprising solutions. When we were thinking about the floor at -1, we asked ourselves: do we really need a floor covering? The answer was ‘no’ so we only did some light finishing work on the subfloor.”

You wouldn’t notice it when you enter this building, but most of the materials used here are on a second lease of life. The window frames in the meeting rooms are from a demolished office building in Hilversum, the fibres used for insulation are made of 16,000 pairs of old jeans, the seats outside were once bicycle frames and the furniture consists of refurbished design pieces.

“The beams are made of larch wood from a sustainable forest in the province of Limburg. They are assembled such that they can be reused in 50 years’ time without any loss of quality. Beams sized 20 by 30 centimetres are standard in the construction industry. These are 21 by 31 centimetres; this means that after sanding them down a bit they’ll be as good as new. Maybe these beams will be worth more money in 50 years’ time than the price we paid for them.”

Place of calm on busy Zuidas

With Circl having opened its doors, the pioneering work is far from over for Malu Hilverink. For this building may very well be sustainable, innovative and circular, what really counts is what happens inside. “We want this to be a place of calm at the busy Zuidas. A place to connect – with oneself, with others and with nature. A place to have interesting conversations, to unwind and stay grounded. That is very important, especially in an environment where a lot of big decisions are being made. We share a common task: to keep our earth beautiful for future generations.”

To be able to connect with others, people need a place to meet. That’s why Circl is open from morning till evening on weekdays and during the weekend as well. “Ideally, this space will be used as much as possible and by different types of people: employees, entrepreneurs, educational institutions, local residents. We really believe in co-creation: if someone has a great idea we’re happy to discuss it with them. This should really become a place that will make this area a bit livelier.”

Circl’s programming is aimed at meeting other people and spreading the message of circularity. Apart from lectures and tours there is room for music, film screenings, yoga lessons and art. And when employees have a meeting here, circularity is an important theme. “If there’s a meeting we serve a shared lunch in order not to waste any food. And that lunch is prepared with local ingredients and in a kitchen with a cap on energy consumption. Of course, that has its effect on the menu; for example, we don’t have a frying pan as it simply uses too much energy.”

Hilverink imagines people from all sorts of different backgrounds running into each other in Circl and inspiring each other. “During the construction phase, I organized pavilion dinners for people who were all involved in circularity but didn’t know each other. This led to very interesting encounters and inspiring conversations. A chat between a doctor and someone working in facilities management resulted in a project aimed at reducing waste in their hospital. I’m convinced that the connections taking place here will lead to bigger changes.”

‘When the job is done and the client is happy, that gives me a huge kick’

BeoSound Shape: design based on acoustics