Anyone can play padel

Vlietstra
Comments Off on Anyone can play padel

There’s a small area for relaxation amidst the high-rise building of the Zuidas: the three
courts of the Play Padel Club. Erik de Wit, the 38-year old founder of this club, is a man with a mission: he wants to put padel, a hybrid between tennis and squash, firmly on the map in this country. 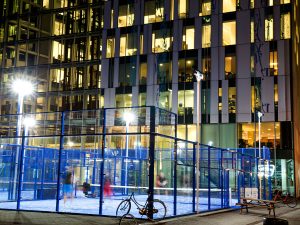 At the bottom of The Rock: three glass-walled courts, measuring 30 by 60 feet, four players, a bright blue surface, a net, a tennis ball and a mini tennis racket. These courts suddenly popped up here, in the beginning of July. Time for some explanation! We meet up with Erik de Wit at one of his padel courts.
“Padel is very popular in Spain and Latin America but here in the Netherlands this racket sport is still in its infancy. And that’s the nice thing about it: padel is the fastest growing sport in Europe and together we’re starting something new here.” The rules are very simple and similar to tennis and squash. It’s always two against two, like a doubles match in tennis, and players are allowed to use the walls, like in squash.

“The underarm serve makes this a very accessible sport. It is pretty social as well because the court is small, so the players are close to each other. And padel is easy on the body as it is played on artificial grass with sand infill; this means good shock absorption, contrary to the hard wooden squash courts. It’s also an ideal sport for older players because padel requires skill rather than power. You’ve got to use your brain in order to score points.”
While Erik talks, there’s a lot of activity at the Play Padel Club with players coming and going. This sport is obviously pretty popular at the Zuidas. How did Erik come up with the idea of opening padel courts in this area?

‘The underarm serve makes this a very accessible sport’

“That’s a long story. It all started in Spain. When I was 23, I moved to Spain and opened a restaurant. I spent a lot of my free time on the padel court and I really fell in love with the sport. Then one day, one of my regular customers asked me to hit a few balls – on the tenniscourt, that is. I’m a pretty good tennis player but he totally thrashed me: 6-0, 6-0. Turned out my opponent was a well-known tennis pro, Guillermo Garcia Lopez, who was number 33 in the ATP rankings at the time. After this humbling defeat we played a game of padel. And guess what? I won! That made me even more enthusiastic about padel.”

Gap in the market

After selling his restaurant in Spain, Erik returned to the Netherlands in 2010. That summer Guillermo, who had become a good friend, asks Erik to join him and go to Wimbledon. Over there, Erik meets the love of his life and decides to stay in England. “When I wanted to play padel with a few friends, I found out there was not a single court in London. So we came up with the idea to build some padel courts ourselves. We really found a gap in the market! There are a lot of Spanish and Argentinians living in London and padel is their sport of choice. Together with a friend we opened four courts in the Canary Wharf business district – you could say the Zuidas of London.”

‘Padel requires skill rather than power’

The padel courts in London were an instant hit. When Erik visited his relatives back home in 2014, he noticed that there were no padel courts here either – not even in Amsterdam. Good enough reason for Erik to open his Play Padel Club. And just like in London, the club in Amsterdam was successful from the day it opened its doors. “The Amsterdam municipality initially offered me a space at Stadionplein where we built the first padel court in the Netherlands. Then I got in touch with the Zuid district council
regarding the Zuidas. At first, they told me there was no room for padel courts at the Zuidas. However, they allowed me to move my padel courts from Stadionplein to Olympiaplein. A great location; the courts are always fully booked.”

First of its kind

“But I wanted to expand and make more people enthusiastic about this wonderful sport. So I approached the district council again, still with the Zuidas in mind, and this time they gave me the go-ahead to open a second padel location. And in September we added location number three: seven new courts at Station Sloterdijk, literally below the platforms, with five indoor courts. That’s another first: we’re the first club with an indoor padel court.”
“For my customers at the Zuidas, the courts at Sloterdijk are a nice alternative; by metro it only takes 13 minutes to get to Station Sluiterdijk from here. And, like everywhere in Amsterdam, the area around Sloterdijk is growing rapidly, with 50,000 new houses and a cultural complex, Kota Kultura, being built. I think we’re going to get a lot more padel aficionados soon!” 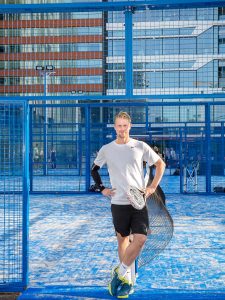 It won’t stop here, as far as Erik is concerned. “We’re looking for a place to receive our players and guests, with showers and an area to serve drinks and snacks. Spanish tapas, of course, to stay true to the sport’s roots. And I’m feeling itchy: I want to expand even further so if anyone could recommend a location…”

How does it work, arranging a game of padel at the Zuidas? Using the website you can rent a court for 45 minutes (20 euros per court) or 90 minutes (40 euros). There’s no membership. The first time you can use a racket for free, after that you either rent a racket or buy your own. For those who feel they need some instruction, the first lesson is free. And there are business leagues at the Zuidas that people can join any time. 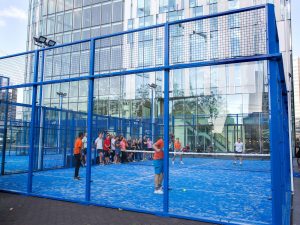 Dentist with a mission