‘Amity is the most beautiful school you can give a child’

You are a Dutch citizen. You live and work in Amsterdam, and your children go to a Dutch school in your area. Sounds logical, but there are other options – like sending your children to an international school like Amity International School Amsterdam.

Most parents wouldn’t even think of the idea. The Dutch education system is fine, isn’t it? And international schools are meant for international children, right? Not really, as the increasing number of Dutch students attending Amity International School shows.

Elspeth French, who is British but has been living in Amsterdam for 22 years now, decided to move her 11-year old daughter from a Dutch Montessori school and enrolled her at Amity.

“I’ve been working at Amity since August 2018, initially in the classroom and then in the admissions department. My own children were already settled in local Dutch schools and were doing well at their schools and were happy. I liked that they were being immersed in the Dutch language and culture. However, I chose to move my daughter last year to Amity.”

Her daughter was introduced to other Dutch speaking students at Amity school, given support to further develop her command of English, both helped her feel at ease and settle in quickly.

But mastering English was not the only reason why Elspeth moved her daughter to an international school. “It is important that my daughter meets people from different cultures and nationalities from all over the world. I think that’s the best learning experience you could wish for your child. She won’t lose her Dutch identity, though, as Amity is located in Amstelveen and the school looks to celebrate and embrace the Dutch culture. The school offers Dutch classes as a mother tongue language alongside the classes helping students to learn Dutch as an additional language. The school celebrate Saint Nicholas and King’s Day and we play shuffleboard with the children. It doesn’t get more Dutch than that!”

Moreover, Elspeth is convinced that attending an international school gives her daughter a broader view. “Not only is she exposed to a more international curriculum but she is making friends with children from around the world. As they chat and learn side by side, she is starting to understand multiple perspectives on global events. I really feel this is helping her to develop an international perspective and empathy for others.”

Since Amity is a private school, the fees are higher than in the mainstream Dutch educational system. With a yearly school fee of ranging between 15,750 and 17,350 euros, Amity is in the ‘mid-price’ range. “Our parents have made an investment and commitment to their children’s education and we look to ensure that the children receive the very best education possible. It helps that our parents are very engaged and supportive of the school and we pride ourselves on working closely together” Elspeth explains.

The school employs fifty teachers, each with his or her own specialty and there is a dedicated team of professionals to support students with special educational needs. The class sizes are small, with a maximum of 20 students for Early Years and 24 students for Primary Years and Middle Years, so personal attention is guaranteed. The children work at their own individual level but they are encouraged to bring out the best of themselves. There is a good collaboration between parent, student and teacher, and parents are regularly informed about their child’s progress.

That is something another parent Teresa can confirm when she reflects on the experience her two young daughters have had at the school. “If I compare their academic level to children of friends attending other schools, I am very impressed with their progress but I also want more from a school than high grades. My little girls love going to school. Every day I ask them what they liked best and what they liked least. My youngest one said the other day: ‘Having to leave school and go home.’ That sums it all up for me…”

Teresa moved from Argentinian to the Netherlands for two years and she found it difficult to choose the right school. “We moved three times in three years’ time. This was going to be the fourth school for my eldest daughter. During our search we noticed that the schools invariably focused on us, the parents, but hardly paid any attention to our children. Our first experience at Amity was totally the opposite!”

She continues: “To me, it was very important that my eldest daughter would feel socially and emotionally supported, that she wouldn’t feel like just another number at school. Amity gave us that very warm feeling from the very first moment. It is a fairly small school and before long every teacher and student knew my children’s names. That was such a nice feeling!”

Now that her children have been at Amity for one year, Teresa stresses how impressed she is by their academic achievements. “Sometimes when I hear them talking among themselves, I’m really impressed by how involved they are with the subjects they discuss at school. They are learning without realizing they are learning. The subjects are presented in such a way that they want to know all about it. That is something I really value and appreciate.”

Zuidas.magazine spoke to two parents who are very enthusiastic about Amity International School. “Other private schools have long waiting lists, but Amity still has room for more students in allyear groups” says Judith Meijer, the school’s communication officer. “Parents can enrol their children anytime during the school year; our teaching system is designed for that. Our doors are open for all children – including Dutch ones…” 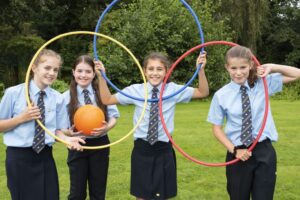 Saints & Stars is not an ordinary gym