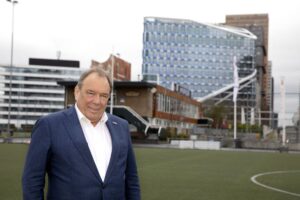 After almost sixty years, Amsterdamsche Football Club – better known as AFC – has left their trusted old clubhouse and moved down the road into a state-of-the-art new home, fitted with all mod cons, sustainable, and offering plenty of opportunity for the club to grow.

AFC, Amsterdam’s oldest and biggest football club, boasts a rich history. They played their first match in 1895, on a pitch between the ponds in the Vondelpark. In 1906, the club moved to the Watergraafsmeer, near the farmstead Goed Genoeg (‘Good Enough’), which later gave its name to the current AFC grounds. In 1920, AFC played their matches at a complex near the Zuidelijke Wandelweg. In 1962, the club moved to the Zuidas and has stayed here ever since.

Since that final move in 1962, Ad Westerhof has been part of the AFC family. First as a player, subsequently as a board member of the club for the past 21 years – the last six of those serving as chairman. During all these years, he has seen volunteers and coaches come and go, and seen shy little players grow into confident young men.

“When AFC came here, this area was not yet known as Zuidas,” Ad says. “Back then, the area between the Schinkel canal and the Amstel River was the business quarter of Amsterdam Zuid. From the 90s onwards the big law firms, banks, AkzoNobel and the WTC moved here. That’s when the name Zuidas was coined.”

“That was also the moment we had to start thinking about the future of our sports complex. Fortunately, AFC will be able to continue playing here at Zuidas. The pitches and the brand-new clubhouse are located in an area a bit further north. To the south, a new construction project for 1,500 houses is taking place. This way, AFC will be able to build a future and realize its ambitions as a club.”

The charming old clubhouse, full of history, will be taken down, but the famous old wooden plaque, reading ‘Het sieraad van een huis zijn de vrienden die er verkeren’ – ‘The beauty of a home are the friends that visit it’ – has been given a prominent place on one of the walls of the new facility. Well, from now on those friends will be able to meet at the dazzling new clubhouse designed by architect Paul de Ruiter.

“Our new clubhouse is fitted with all mod cons: solar panels, an integrated covered grandstand and more dressing rooms than we had before, all with their own showers. Our old home was full of charm, but it needed a lot of urgent maintenance work including things like safety glass.”

Not only the old clubhouse will disappear, however: AFC’s famous grass pitches, seven in all, have been replaced by five pitches with artificial grass. “We opted for artificial grass as we want to give all of our 130 teams the chance to play football. An artificial pitch simply allows many more hours of use than a regular grass pitch. We started work on the main pitch and the clubhouse, and the entire complex was ready by the end of the summer.”

AFC is home to 130 teams and that makes them the biggest amateur football club in the Netherlands. Last season, their first team was crowned champions of the Dutch Second Division. AFC is a club with status and held in high esteem for a good reason.

“For the 7th year running, De Voetbaltrainer magazine voted AFC the best amateur football club out of all the 3,000 football clubs in the Netherlands. That makes us immensely proud but we’re not doing this to collect awards. We simply want to run our club to the best of our abilities and develop it further. The volunteers are very committed AFC members, full of energy and driven to succeed. AFC is a well-organized football club.”

With 70 football coaches and 300 volunteers, all screened and in possession of a certificate of good conduct (VOG), AFC is a big club. “Our waiting lists are very long, especially for young players.”

If you are coming down here to watch a game of football on a Saturday or Sunday, you’ll probably see a lot of Dutch celebrities along the touchline. “A lot of well-known Dutch people are living in this area and they come here to support their children when they’re playing a match. No, I’m not going to tell you who they are. They have a right to privacy.”

The Zuidas area is the most expensive piece of land in the country, estimated at a value of around 1.5 billion euros. “It’s absolutely marvellous that the city of Amsterdam allows AFC to stay here. On the other hand, I think they are quite happy with us. After all, the Zuidas needs green space and a sports club. By the way, during the week our pitches are used by local schools.”

“We’ve concluded a lease agreement with the city council for the next 25 years, with an option for an additional 25 years. But if the land prices keep going up at the current rate, we will have to wait and see what happens. This area is changing fast and we know AFC might not be in this carefree position forever, but at the moment we’re simply looking forward to using our new clubhouse and our brand new pitches.”

'Amity is the most beautiful school you can give a child'