Architecture Economy
Vlietstra
Comments Off on 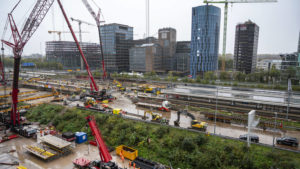 The construction of the Zuidasdok project in Amsterdam may cost 1 billion euros more, according to the NOS yesterday. Moreover, a letter from Minister Cora van Nieuwenhuizen to the House of Representatives reveals that the large-scale construction project is once again being delayed.

Construction had initially been planned for nine years. But even before the first shovel hit the ground, the prestigious project was delayed. One of the reasons for this was the complexity of the project, with many tunnels in a small area.

Because of the delays, the cabinet had the project investigated by a committee led by former minister Sybilla Dekker. It now concludes that the project must go ahead at all costs. “Doing nothing is not an option,” she advises. Otherwise there will be too many traffic jams on the highway and at the public transport.

In view of the complexity, the project should be divided into small parts, Dekker advises. The last part will then be completed between 2032 and 2036, which is four years later than planned at the earliest. But all this also costs more money. The budget deficit is now estimated at between 700 million and 1 billion euros.

From an article that newspaper NRC Saturday 28 March devoted to the developments on the Zuidasdok, it appears that the expansion of Station Zuid in particular has high priority. The number of passengers grew by 47 percent in the last year. Partly due to the arrival of international trains, 300,000 passengers per day are expected here in due course instead of the current 80,000, according to NRC.

Walter Etty, chairman of passenger organisation Rover, even calls the situation dangerous. “People are falling off the platform, it’s so crowded there.

Two professors, the economists Coen Teulings and Henri de Groot, who were consulted by Dekker, find the plans for two additional tracks too modest. They advocate eight tracks.

In her advice, former minister Dekker concludes that the national prosperity will only benefit if the Zuidasdok project is completed. Bureau Decisio calculated that two billion in costs would be offset by 2.1 billion in benefits.

According to a spokesman for the municipality of Amsterdam, the municipality is now entering into talks with the national government. The agreement is that Amsterdam will pay a quarter of the extra costs, and that the government will pay the rest. Dekker expects that politicians will agree to the extra billion, because the transport hub is of national importance. “You don’t solve anything by stopping, especially in times of crisis,” she says to NRC.