Eduard Herkes
Comments Off on Jeroen Swolfs: 195 pictures from 195 countries 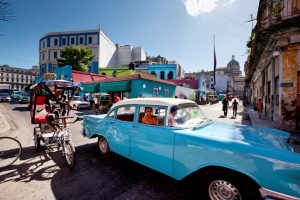 Photographer Jeroen Swolfs has traveled the world for the past seven years to collect photos for his book ‘Streets of the World’. He took 195 photos taken in 195 countries that depict street life.

In 2009 Jeroen started a huge project: Streets of the World. He wanted to photograph street life in every capital of the world to show what connects people. Jeroen completed this masterpiece in 2017.

With 195 catchy photos of people all over the world, Streets of the World is now the world’s largest photo project ever. By using a consistent visual approach, the photographer has created a strong cohesion between the images.

These accessible color compositions have street trade as their subject and a horizon that is always the same. He wants to show the similarities between people around the world, despite the differences in living conditions.

After seven years of traveling, he now finds it time to share the amazing story of Streets of the World. The photo exhibition can be seen at the fences on the Zuidasdok construction site in the center of Zuidas.